Russia is carrying out another large-scale military exercises with China, this time inviting forces coming from India, Pakistan, Kyrgyzstan, Kazakhstan, Tajikistan and Uzbekistan. Russia research experts like Mathieu Boulegue, of the Russia and Eurasia Programme at Chatham House, perceive the military drills as Moscow’s way of sending a message of power to the West.

Actually, Russia and China started holding joint military exercises via naval drills held as far back as 2012. Even a decade ago, the display of military partnership by the two countries was already regarded as their way of showing those in the West that they do not stand alone.

Fortunately for Russia, the U.S. through Trump has become vulnerable by playing right into Russia’s strategic move by accepting help in getting him installed in 2016 as the president of the U.S. Even more favorable to the strategic Russia-China military partnership is the trade war initiated by Trump versus China, which weakened not only the U.S. economy but in multiple economies in the West.

Still, Russia’s Minister of Defense, Sergei Shoigu, stated earlier this September that the continuation of their series of joint military exercises is not directed against any specific country, but only as a means of countering threats of international terrorism,

Yet, observers like Mathieu Boulegue view this year’s show of military partnership by Russia and China as one that sends

“a very much anti-Western message, specifically anti-American message to convey that Russia is not isolated and Russia can operate even with a potential rival like China; albeit Russians still cautiously regard China as both friend, enemy and potential competitor.”

<
According to Boulegue, it is also Russia’s opportunity to show off military wares that it can provide, not only to China, but to the new forces participating in this year’s “Tsentr-2019” military exercises.

About the “Tsentr-2019” Joint Military Exercises

“Tsentr-2019” is this year’s holding of Russia’s grandiose annual war games, which will put up for demonstration more than 20,000 military weapons and equipment, 600 aircrafts, as well as 15 naval ships and support vessels, whilst involving 128,000 military personnel.

According to the Russian defense ministry, drills are likewise designed to tryout the readiness for combat of military commanders and troops stationed within Russia’s central military district in Tsentr, Russia. In addition, participants will get to see Russia test its military prowess in the Arctic.

END_OF_DOCUMENT_TOKEN_TO_BE_REPLACED

Reminders Before Blogging About Politics

You’re fascinated with politics and are an online utilizer of blog sites. To be able to maximize visitors you need and seo expert and it is also a must to evade committing errors that are important while keeping and inditing it.  By eschewing the mistakes that are sizably, you can engender a more welcoming environment to your site, one that consumers will come back which they will suggest to their friends.

Don’t make the mistake of neglecting the look of your site that talks about politics. The topic itself is already complicated. Make sure that your topic will be complimented by the colors and the design of your site. Keep in mind that the design of your sight will be user-friendly for the people who will visit the site are not millennial but mostly “aged”. They ought to be organized in a manner which has structure so the visitor can browse the website.

Owning a site means giving your visitors the chance to communicate with you. It is surely inevitable to receive comments that will also require you to answer. Most of these people who leave comments visited your site  because they believe you are on the same side and through your site, their opinions regarding the government flaws, national or international conflicts, or any politician will always be acknowledged and heard. Having said that, it really matters for the readers especially those who leave comments to be noticed by the administrator of the site. Your visitors will see those and will definitely come back and visit your website.

With regards to the comments, not everyone or every visitor will leave a good comment. Since blogs are also social networks, there will always be a group of audience who will not care leaving rude or below-the-belt comments on your site. Indeed it is true that we cannot please everyone. The perfect thing to do is not to fight back but to ignore them.

END_OF_DOCUMENT_TOKEN_TO_BE_REPLACED

We have written about the value of worker motivation, and we will not stop it is that employees are productive workers, if there is 1 thing which we all know for sure. But why bother inspiring workers? Is not it up for them to do anything is required to execute their responsibilities to the best of the skills? Worker motivation is not about that, although Obviously, you need workers that are driven and may do their job without. By getting the best employee engagement app then there is a chance for better employee engagement and communication.

It is about knowing a organization’s most precious assets are the men and women working there — to get their capability to attain targets, their thoughts, and also their ability. Worker counts to be engaged at work because of a environment nurturing and fostering workers’ ability, ideas and abilities are going to be to your advantage.

Organizations who put in an attempt to inspire their employees view greater gains compared to alternative — let us take a look at a Number of them: 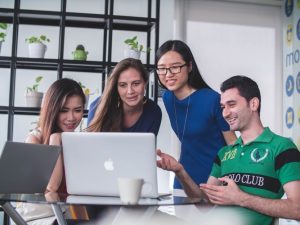 1. Greater retention and reduced worker turnover The practice of replacing and instruction workers is costly. When firms are invested in maintaining their workers motivated, they have a tendency to keep their talent and reduce employee turnover, thereby saving money and time, and keeping understanding of the business and within the small business.

2. A Decrease in absenteeism Many businesses forget that workers are more inclined to seek out reasons to steer clear of work, although this appears to be a no-brainer advantage. This may cost the business precious time, may cut into productivity and also have all kinds of unwanted roll-on consequences (e.g., customer dissatisfaction, missed deadlines, reduction in standing, etc.). When workers feel motivated to do, they’ll also be likely (41 percent more likely) to appear — physically and emotionally.

3. Greater productivity speed Motivated employees are more engaged on the job resulting in a 17 percent growth in productivity.

4. Greater levels of worker satisfaction Employees have a tendency to feel enthused about doing their responsibilities and connected to their own organization. Employees are spent in the achievement of their business and their success at large.

A business which motivates its employees produces satisfying encounters but raises employee loyalty.

5. Greater profitability It stands to reason that the profitability of a company would reap if each the above mentioned benefits are addressed. Employees who are interested in being in the office, who do not depart to find greener pastures, who do not stay home every chance they get, who appear emotionally and physically, that are happy with their working environment and conditions result in motivated employees who wish to add value throughout their regular work — thus resulting in profitability and a decrease in avoidable expenses.

END_OF_DOCUMENT_TOKEN_TO_BE_REPLACED

Celebrities appeared in black at the 75th Golden Globe Awards. The media is very keen on what they call the “Red Carpet Political Fashion Manifesto.” This is the latest drop in the politically popular rainy season.

Brexit spreads the influence of Donald Trump’s White House and the emergence of so-called anti-progressive radicalism in Europe and North America to cultural waters, demonstrating a political choice. Feltists, white supremacists, anti-laws, nationalists, and advocates of social justice are preparing to respond to political thinking.

This kind of political dress is not a politician’s dress. This is an individual and group that uses everyday clothing to express political clothing. The problem is that participants and commentators, journalists and academics are often eager to mark fashion. But is there a fashion dress fashion?

The Fashion Industry in SA

The political aspect of clothing is intuitively understood from the moment people are born. In essence, human society is like a clothing society. It represents what a person wears, how to wear, the degree of social freedom and influence that he wears.

Clothing expression covers all political areas from compliance to rebellion. In short, clothing styles that are considered challenging or challenging, or as a substitute for the current state, can spontaneously gain political significance.

Political choice is a group of people who work together to raise concerns about social issues. They are dressed in form style. The political dress formula includes all the fashion jil sander sale elements, but not the exact proportions.

Modern fashion is mediocre everywhere, so you can blame political choices and fashion storms. Since the 18th century, most industries have been manufacturing clothes, accessories, beauty services, products, etc. The industry is integrated with the entire fashion industry and advertisers.

The fashion industry uses global trend forecasts to shape historical records and current cultural sources and events. They use this data to determine the colors, styles, and products people want in the coming season.